1.      VIETNAMESE STEEL PIPE INDUSTRY
Look at the total production of  the firms belong to Vietnamese Steel Association (VSA's members) in first 11 months of 2014 was 1.0 million MT[1], estimated for whole 2014 is 1.16 million MT, total apparent consumption estimated 0.994 million MT for whole year, increasing 21% compared with last year.
Like the flat products, demand growth for steel pipe is high in 2015, estimated growth rate is 15%, according to calculation by author, anticipated consumption of steel pipes of Vietnam in 2015 will be 1.15 million MT while VSA forecast is 1.36 million MT[2].
Figure 1: Total apparent consumption of steel pipes in 2012, 2013 and provision for 2014 (Unit: MT)

Source: Data of 2012 and 2013 are from VSA[3]; *calculated by author
Notes: all steel pipes were produced in Vietnam are welded pipes.
Take a look at the market share of the three biggest players are leading the steel pipes market of Vietnam.
Figure 2: Market share of steel pipe sector of Vietnam in 2013 and 2014

Source: All data  from VSA; Except (* ) marks calculated by author 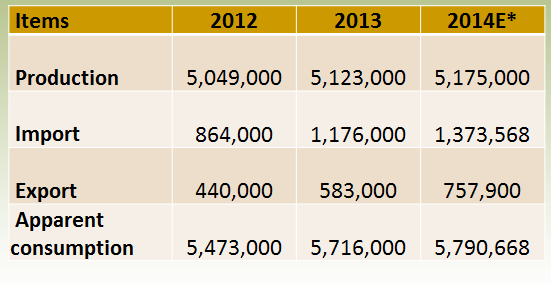 Source: Newsletters in Nov 2013 and Dec 2014 (VSA)
Hoa Phat is applying the vertical integration strategies including backward and forward integration, owning an integrated production chain from extraction and processing of iron ore to manufacturing steel products. They are performing value chain activities more efficiently than rivals, take advantage of low production cost though cheap raw materials by exploiting iron ore to produce steel, to apply competitive strategy: Cost leadership strategy in order to gain the market share and finding the profit in the saturated steel market in Vietnam.
In 2014, Hoa Phat has achieved sales volume of 1 million tons of construction steel, exceeding 11% of the year plan and up 43% compared with 2013. Leads in the construction steel market with 19% market share[4]. It makes a sales plan of 1.2 million tons for the year 2015.
In second place in the standings is Pomina, the company has lost throne of industry leader in hand Hoa Phat in 2014. Sales of the first 11 months of 2014 was 721 thousand tons, is expected to be 786 thousand tons yearly, an increase around 8% compared with last year. This plant is running only 60% capacity[5], high depreciation, high cost of capital and high cost of input material of the EAF iron making technology, has made this company consecutive losses two years recently.

AN OVERVIEW OF VIETNAMESE STEEL INDUSTRY 2014

PART 1: OVERVIEW OF VIETNAMESE COATED STEEL SHEETS INDUSTRY
Vietnam has experienced a dramatic year with 2014, from the East Sea Event in May, to the oil price shocks in September. Despite a high GDP growth of 5.9%[1], higher than the growth rate in 2013 (5.2%), and credit growth reached 12.62%[2] as planed, but the business has not improved as expected. Stock market volatility as the big waves[3] with an increase of 140 points in VNindex from 500 points late 2013 to 640 points and went down 520 points at the end of the year. The housing market remained is not warmer than 2013, it just became better in last quarter thanks to the government's stimulus packages as credit package of 30.000 billion VND, and due to lower interest rates as well as the easing consumer lending by banks. In 2014, interest rates have fallen nearly 50% from a year earlier, in which short-term interest rates is around 7%, for long-term loans from 8-12% depending on each industry[4].
In this context we will see the steel industry of Vietnam after a year of operation. Firstly, we will go into detail the sector of galvanized and color coated steel sheet, the sector which has the impression growth rates recently.
Figure 1: 2014 market share of metallic and color coated steel sheet industry of Vietnam

Source: Newsletters in Dec 2014 (VSA)
To be noted that the data of market share above was calculated based on only data of the members of Vietnam Steel Association (VSA): internal consumption of all VSA members was reached 1.65 million MT in first 11 months of 2014[5]. It does not include some other companies which has not joined to VSA. In 2014, sales volume of all members in VSA may reach 1.8 million MT, while total consumption of the entire country may reach 2.6 million MT this year.
On the figure 1, we can see some significant changes are as follows:
-          CSVC has officially entered the Vietnam market of galvanized steel sheet with a significant market share is 6.8%, with sales volume in the first 11 months of the year reached 114.039 tons, of which domestic consumption was 77,000 tons. This company is a joint venture between Nippon Steel & Sumitomo Metal Corporation and China Steel Corporation, Formosa Ha Tinh and Sumitomo Corporation just started operation in October last year[6].
-          Sunsteel holds a significant growth rate from 7% last year up to 9% this year. This increase was contributed from two coating lines which were opened in December last year (CGL with capacity 240.000 tpy and CCL with capacity 96.000 tpy).
-          Bluescope Steel market share was decreased from 5.9% last year down to 3.8% this year due to the booming of steel production capacity in country, while it still keeps the old capacity.
-          SSSC market share reduced from 7% last year to 5.3% this year. Since, its production ability was limited. Next year, SSSC for sure will get a high growth rate of market share when it launch one CGL 150.000 tpy and one CCL 70.000 tpy into operation (they are under trial production).
Forecast for 2015
Figure 2: Total apparent consumption of metallic and color coated steel sheets in 2012, 2013 and provision for 2014 (Unit: MT)

Source: Data of 2012 and 2013 are from VSA; *calculated by author
Calculate based on my personal, the consumption of coated steel sheet in 2015 will reach 3.29 million tons, which is equivalent to the forecast of VSA (3.25 million tons)[7].
The increased output will come from the companies such as Ton Dong A, after putting into operation a new plant with a CGL 200,000 tpy, SSSC starts up an CGL 150,000 tpy, and CSVC may raise the capacity of the CGL 300,000 tpy by searching the demands of high quality galvanized products (GA) for the auto industry in which Truong Hai Auto and Vinaxuki have to use 100% imported raw materials, for instance.