The appeal of galvanized steel sector of Vietnam

Who are major players in the Vietnam galvanized steel market?
According to VSA (Vietnam Steel Association), the apparent consumption in 2015 was 3.3 million tons nationwide, including products produced in the country is 2.1 million tons and the rest is the import products.
Domestic market share of the leading companies and also the members of the Vietnam Steel Association: 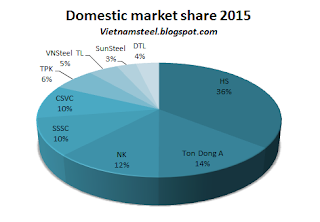 To be noted that the above data is the domestic consumption, excluding the export markets, we see potential rivals occupy very good market shares. These companies are not only gradually narrowing the gap versus the market leading company that is increasingly showing an ability to sustainable growth by upgrading technology to produce high quality products, the production process do not harm the environment, develop the modern management systems as well as to build a strong corporate culture as the platform of development of companies.

These companies have different competitive advantages, some of them is pursuing the strategy to scale up the production and occupy a large part of the domestic market, others are pursuing a strategy of enhancing product quality beside the development of production scale, such as TDA, Sunsteel and SSSC. For the steel industry in general as well as the galvanized steel industry, large-scale production is a leading advantage, so we can see clearly the investment projects being developed continually recently.
80% of capacity is being exploited!
The production capacity of Vietnam metallic coated steel industry currently approximately 3.6 million tons a year in the hands of about 10 large companies and 10 small companies, meanwhile the production of galvanized steel in 2015 reached 3.1 million tons, which exploited 81% the capacity.
According to my survey, the production capacity increased in 2016 and 2017 about 2.4 million tons, raising the capacity to 6 million tons nationwide, equivalent to the capacity increase is 60%! Galvanized steel industry is the sector with the highest consumption in the segments of the steel industry recently, however, the average annual growth (CAGR) in recent years was only 22%. Thus, this growth of production capacity is relatively high compared to the actual demand.
New entrants?
There is quite a lot of investment projects implemented in recent time, making the galvanized steel market became very hot in Vietnam. Typically, the project to expand the phase 2 of TDA Thu Dau Mot, increasing the capacity of 600 thousand tons per year; No.3 Nam Kim project raises capacity further 650 thousand tons per year; Hoa Sen Nghe An project raises the capacity up to 430 thousand tons per year, and a largest player of long steel sector, Hoa Phat, recently announced a project for producing galvanized steel sheet with capacity of 400 thousand tons a year as a potential new entry.
Hoa Phat currently covers a whole production chain of steel, from iron ore to iron making and steel making, but, the output is only long product. It is going to produce flat products, but, starting from the downstream of steel value chain. This approach strategy is very popular in the world, of course, there are some existing competitors, also are preparing to go up to the upstream. If Hoa Phat wants to close the supply chain of steel industry, it needs to invest new melt shop, slab casting, as well as hot strip mills and tandem cold mills, it shall be a long way, of course, Hoa Phat will not be alone in this journey.
Potential demands?
FDI projects in Vietnam grows well, in 2015, total investment capital is 15.23 billion US dollars, thus, the industrial construction market developed very well from last year to this year, besides, the real estate market recovers from last year and is growing quite hot this year has given rise to huge demand for roofing products and welded steel pipes.
Pre-Engineered Buildings account for over 70% of industrial workshops. Therefore, the growth prospects of the manufacturing industry will entail a large demand for this type of home, accompanied with the needs of the roofing and walls. According to Mr. Joseph Mathew, CEO of Kirby Vietnam, in the period 2010-2013, the growth rate of Pre-Engineered Buildings market reaches 15-17% per year, and the rate from 2014 until now must be higher, according to my calculate, the total demand of the Pre-Engineered Buildings of Vietnam around 600-800 thousand tons a year. The main players in this market are Zamil Steel, PEB Steel, Kirby, Dai Dung, Atad, BMB.
In addition, the export of galvanizing steel sheet was forecasted with a strong growth in 2016, exports of first two months was 98 thousand tons, an increase of 18% over the same period last year.
HCM city's metro is building which is scheduled for completion in 2020 with a total investment of about $ 3 billion. In the period from 2016-2020 Vietnam needs about 48 billion of USD to develop the transport infrastructure system. The household electrical appliances industry and the automobile industry are currently using imported materials. Those are very the potential demands beside the existing demand for roofing and steel welded pipes and it is the reason why the galvanizing industry of Vietnam always grows quite hot. 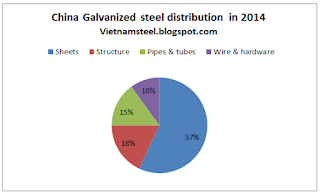