Although, the first few months of 2013, Vietnam economic growth is still not satisfactory, the first 6 months of GDP growth reached 4.9% in 2013 roughly[1] equal to the increase last year, 4.93%, however, the top businesses in the galvanized steel sheet industry still retain the sales quantity as last year, and even more advanced.
The chart below shows the Hoa Sen sales quantity ratio increased from 40.5% in 2012 to 43.2%; Ton Dong A increased slightly from 12% to 12.5%. Especially, Nam Kim from market share of 2.9% in 2012 joins into among top 5 market leaders, accounting for 10.5%. BlueScope Steel and Ton Phuong Nam (SSSC) almost unchanged compared with 2012.
Figure 1: Percentage of Sales quantity in 4 first months of 2013[2] 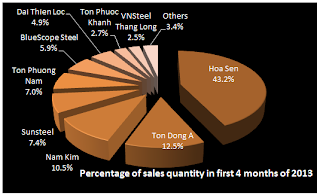 Source: Adapted from VSA data in May 2013[3]
Because, the sales quantity including domestic and export market, based on VSA report, I calculate exactly market share for both separate markets as follow:
Domestic Market:
Figure 2: Vietnam's market share (domestic) of galvanized steel sheets in 4 first months of 2013 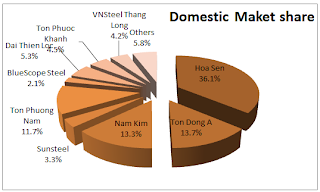 Source: Adapted from VSA data in May 2013
Nam Kim has come a long way, reached the third largest market share in the domestic market. Business result of NKG is very positive in the first 6 months of 2013: Revenues of 2043 billion VND, reached 70% compared to the total of 2012. Profit to 43 billion VND, a significant gap compared to a net loss of 105 billion VND in 2012. 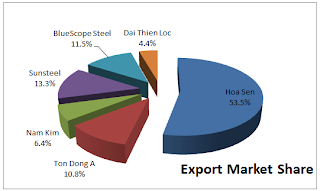 Source: Adapted from VSA data in May 2013
BlueScope Steel and Sunsteel have turn export rate is 78% and 73%. Till now, the export market is still their target market.
Hoa Sen's export ratio rose from 40% in 2012 to 50% in early 2013 in its market structure.
Hoa Sen's market share of export accounted for more than half the galvanized manufacturers in Vietnam, 53.5%. It increasingly dependent on export markets. So, next time they may realize investment projects abroad to avoid dumping lawsuits.